Are Council Housing Officers to blame for preventing vulnerable people getting housed? The answer to that is not as straight forward as it might initially seem… 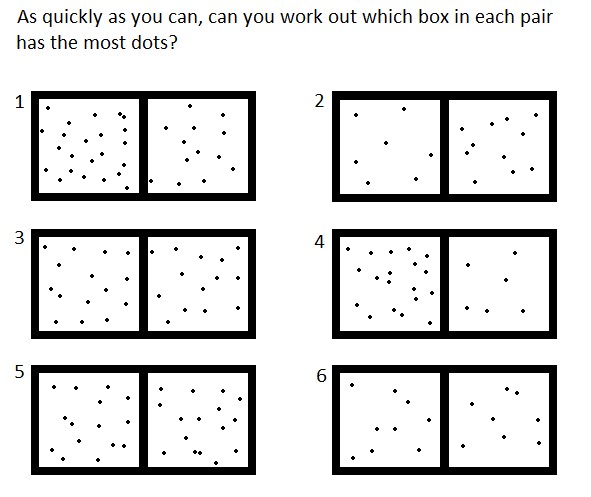 …The picture of dots-in-boxes comes from a fascinating experiment that behavioural psychologist, Dan Ariely, conducted a few years back.

He first set a group of human guinea pigs the task of completing hundreds of these dots-in-boxes puzzles, and found that humans are pretty good at quickly working out which box had the most dots in, even when the numbers of dots were similar.

But then in a second stage of the experiment, he paid the ‘guinea pigs’ a small sum of money every time they thought the box in the right had the most dots. Guess what, suddenly they became less great at working it out – if they weren’t sure they tended to pick the box on the right.

Now the point isn’t that the people were being deliberately dishonest, it is just that when faced with complex decisions, throwing rewards or punishments into the mix reduces our brain’s ability to think clearly. Dan Ariely used the example of doctors prescribing different medications for similar presentations – often diagnoses are incredibly complex and there are financial incentives for prescribing certain medications over others, meaning, you’ve guessed it, the more lucrative medications tend to be prescribed in cases of uncertainty. Not because the GPs are crooks – the way our brains work mean they don’t even realise the process is happening, but the effect is very real and sometimes quite dramatic.

So what about Council Housing Officers?

Making homelessness decisions can sometimes be straight forward, but often they actually require the weighing of a lot of information within a legal framework that can get complex. So it’s hard enough to make decisions fairly, even on a level playing field.

Part of the problem with so many decisions being faulty though is that the playing field can sometimes be very far from level.

Some councils place immense pressure on frontline officers to gatekeep – your performance is sometimes measured in how few homeless applications you accept (something that should be completely out of your control). Officers can often expect next-to-no emotional support for their role (and think how many horrendous situations they deal with day in, day out) and have little or no training in things like anti-discriminatory practice. And sometimes ‘rewards’ and ‘punishments’ are built into the very procedures (so for example, if you accept a homeless application, some councils then expect you to go and source the temporary accommodation yourself, meaning that avoiding homeless applications makes your life much easier).

So does that get Housing Officers off the hook when it comes to the issue of knowingly withholding safe accommodation from vulnerable people?

Obviously not, doing so might still be a criminal offence (misfeasance in a public office) and a potential safeguarding issue. But it does mean the solution to the issue is far less black and white. Officers still need to act ethically in their role, but ultimately, they are often placed in impossible situations that most people would do exactly the same in. A few officers seem to delight in withholding assistance from people they don’t like, but the majority try to do the best they can with what they have – and if they leave their job there’s a risk that someone much more ruthless would fill their position (so decent housing officers should be supported as much as possible).

The solution to this, or part of it at least, most probably lies in the way the teams are managed and resourced. And that pushes a lot of the culpability up to senior managers and then right up to central government – at the moment, the system not only robs thousands of vulnerable people of safe housing each year, it also robs many housing officers of the opportunity to work in a job free from the illegitimate, soul-destroying tension that the system instils, and frustrates the desire to actually house people that they presumably wanted to do in the first place.